From the afternoon and well into the night, the atmosphere of this year’s Acquaintance Party at the Anchor Driving Range was electric with the collective excitement of students, staff, and honored guests.  The level of enthusiasm lasted throughout the event, coming to a crescendo at certain points, but overall the buzz could be felt the entire night of August 15, 2014.

Even the preparation leading up to the event was action-packed.  Organizing the event was a two-month endeavor headed by M. Jen Manilay and her team, as well as Sir JV Manuel, who was in charge of sponsorship acquisitions, and Sir Jay Castorio, the Master of Ceremonies.  “It was an exciting process,” said M. Jen of the many hours logged for meetings, phone calls, and simply getting things done for the party. For her and the whole organizing committee, the ultimate goal, in addition to the monetary proceeds for much-needed campus resources, is for students to have fun.  “It’s nice to see the enjoyment of the students,” M. Jen says,  “after all of the hard work of everyone.”

All of their efforts certainly paid off the next day at the Anchor Driving Range.  The event went off to a rousing start with the Open Jam, as performances from students and other locals were met with the screams of the audience.  With a pre-show like this, everyone in attendance was in for a very fun evening.

The Acquaintance Party was officially kicked off with the invocation, national anthem, school hymn, and a special dance performance.  The Sinag Dance Troupe, who had been practicing for months, along with members of the faculty (including myself), who had just learned the dance the day before, entertained the still-growing crowd with a peppy routine set to Pharrell’s “Happy.”  For me, it was all a blur, but the audience seemed to like it.

The general enthusiasm of the students remained at a fever pitch with the start of the Battle of the Bands.  Judged by myself along two members of the Cuerdas Band, who would be performing later, each participating musical act kept the adoring crowd.  Even as the rain started trickling down, the good times would not cease; the students simply covered their heads with makeshift umbrellas and continued cheering on their favorite contestants.

After the raffle drawing, the Cuerdas Band took to the stage and sent the crowd into frenzy with their hyperactive brand of ska-infused reggae.  Everyone in the crowd was jumping, screaming, and singing along to their favorite songs.  Around this time the rain stopped, which was very much welcome, not that anyone really seemed to notice.

At the end of the Cuerdas Band’s first set of the night, there was a brief lull, which in hindsight had been the calm before the storm.  The swells of teenage screams sounded abruptly.  Many of these girls were utterly hysterical, though some thankfully have the self-awareness to grin and laugh about their temporary mania.  With all the fevered shrieks and whispers from the girls (and some boys) in the audience, it was quite apparent who was entering the vicinity.  Then, in the distance, emerged the four maputi chisled Adonises known collectively as 1:43.  Every girl in attendance went ballistic as the boy band was escorted by security to the stage.

When the boys of 1:43 started their performance, it was clear why they were of the objects of affection for so many of the young females in the crowd.  The hit group captivated these girls with their smooth vocals, impossibly good looks, and overall affable charm.  There was no mystery as to why they were awarded the 2014 GMMSF Award for Most Promising Group—the infatuation of their fans in the audience was certainly a good indicator.

Yet, the elation of the crowd would not fade even after 1:43 left the stage.  With Cuerdas Band performing their second set of the night, the students continued to revel in the evening’s festivities, their activity level seemingly endless.  Then came the awarding of prizes for Best Dressed of the Night and the winners of the Battle of the Bands.  1:43 was brought back to the stage, much to the delight of the females in the crowd.  Then came Cuerdas Band’s third performance of the night, and sure enough, the crowd continued to dance around, though some decided to stop to eat or take selfies.

After 1:43 and other guests were presented awards of appreciation and the Sinag Dance Troupe performed for a second time, one would think that the energy of the students would wane.  However, with Cuerdas Band – the hardest-working group I have ever seen and my vote for the MVPs of the night other than M. Jen, Sr. JV, and Sr. Jay—taking to the stage for their fourth set, the crowd continued their fun.  Sr. Jay even joined in on percussion.  With midnight approaching, the students continued to dance to hard-thumping house music, showing almost no signs of exhaustion.

Seeing the ostensibly never-ending energy of the students was a sure sign that this year’s Acquaintance Party was a complete success.  The constant state of excitement and enthusiasm of the students in attendance realized the goals of M. Jen, Sr. JV, Sr. Jay, and everyone who put so much effort into this night.  It will be interesting to see what they will do for next year’s Acquaintance Party, but there is no doubt that the students, staff, and other guests in attendance will have a good time. 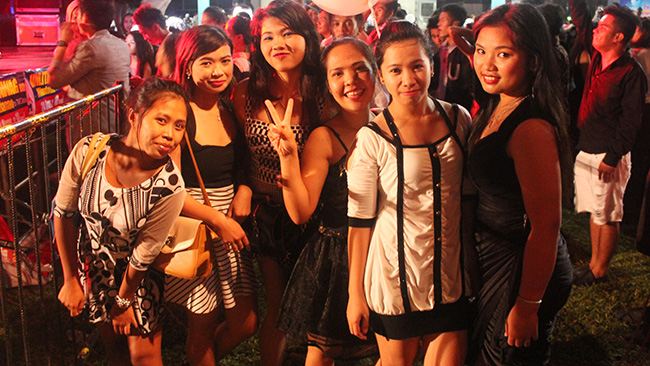 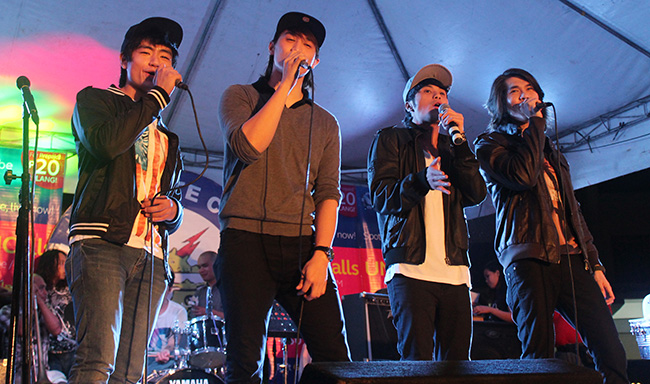 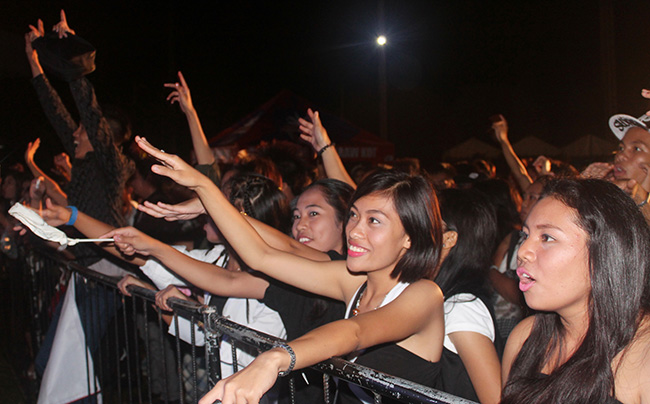 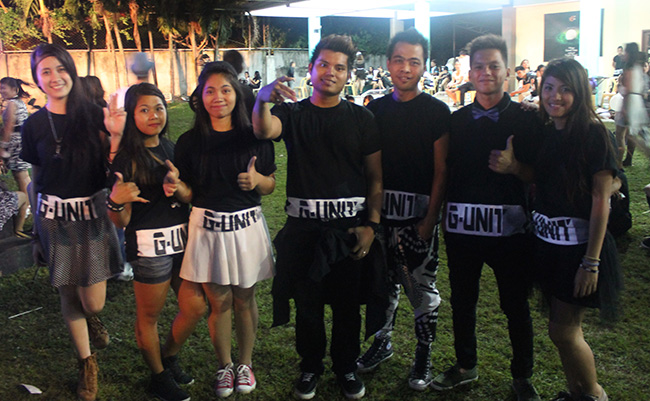 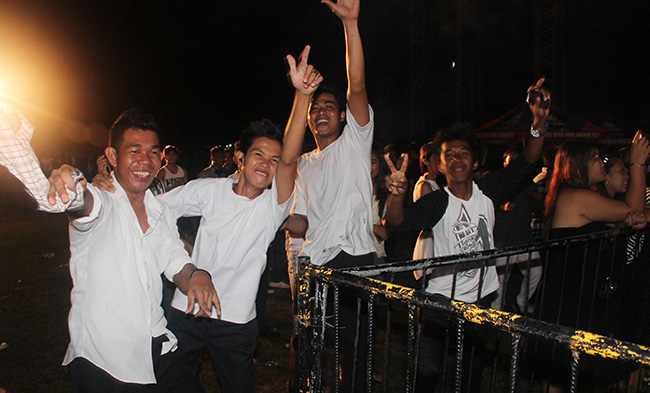 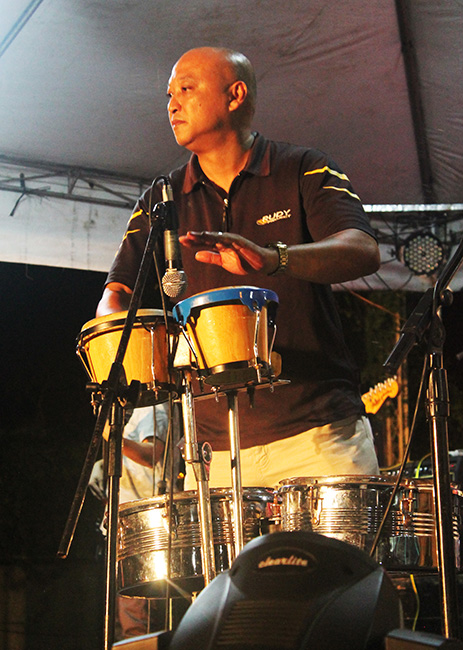 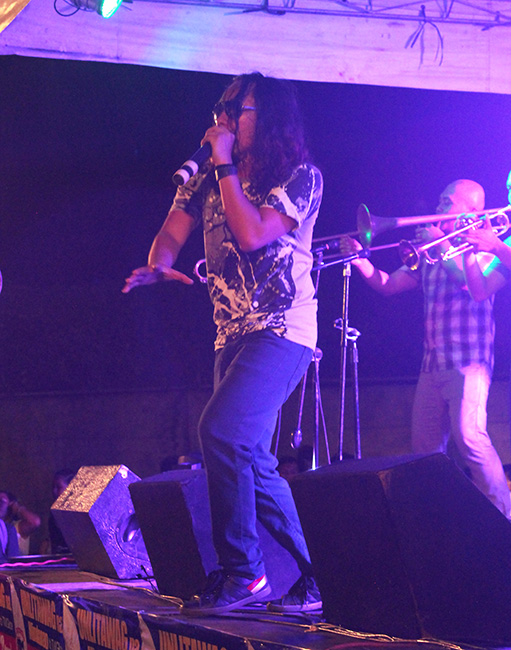