In my early formative years we played piko, we socialized by patintero, tagutaguan, sungka and holen and interacted with other children by doing luksongtinik, luksonglubid and hilianglubid. As you can imagine my younger years were not only about socialization but also about the cultivation of a strong, unique culture within me.

Now children are playing different games. They sit engrossed, with almost lifeless stares, playing ‘DOTA’, ‘Counter Strike’, and many other games found on computers and other electronic platforms.  Gone are the familiar ways of Filipinos. Gone is the face-to-face interaction of playing with friends, cousins and relatives. Gone is the fun-filled playful afternoon. Gone are the Philippine traditional games.

To help today’s youth remember how things used to be, our Buwan ng Wika celebration included traditional larong Pinoy, which are considered vital to our heritage.

This year, the college added significantly more to the number of games that were played, all of which required teamwork and intense physical activity, a departure from just sitting on the couch and pressing the buttons of an Xbox or swiping fingers on an iPad.

Not only did we get in a good sweat, but we also nourished our hearts and souls. Just as they have for generations, these games can serve as a positive influence to our mental, emotional, social and moral being. Our traditions and heritage can be revived if our children take up these games all throughout their adolescent and adult lives.

Yes, we will have another chance to enjoy larong Pinoy next August, but even before then, I hope we can play these games more often. 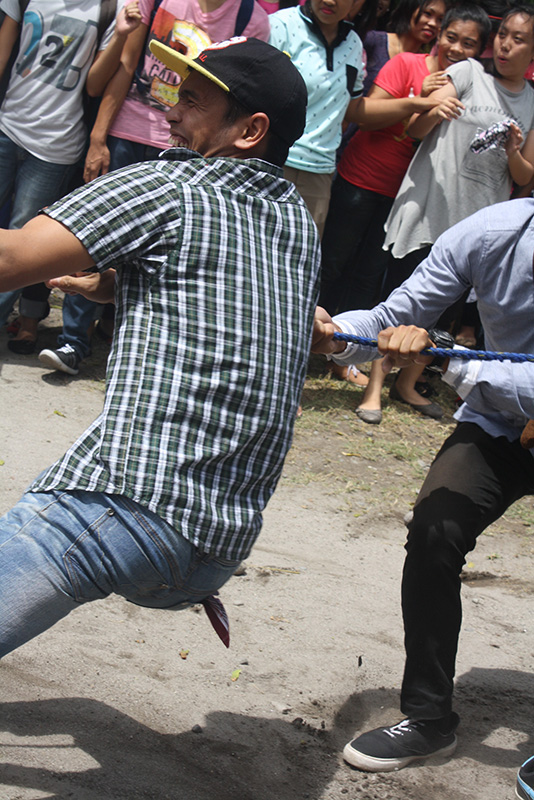 ONE STUDENT TRYING TO CLIMB A GREASY BAMBOO POLE (PALO SEBO) TO GET TO THE PRICE MONEY .